Marc Awodey was a Burlington painter and former Seven days art critic who died suddenly in 2012 at the age of 51. Since then, Sue Higby, Managing Director of Studio Place des Arts in Barre, thinks about an exhibition the two men were talking about presenting.

Awodey and Higby connected to their common Michigan origins. Both grew up at a time when Detroit and the Cranbrook Academy of the Arts, located in its suburb, were a hub of innovation in art and design. Awodey received his Masters of Fine Arts from Cranbrook in the early 1980s; Higby used to visit friends there in cars she received every year from her uncle, who worked for General Motors. In this case, the arts linked the school and the maker: architect Eliel Saarinen designed the Cranbrook campus in 1932, and his son Eero designed the GM Tech Center campus in 1949.

Over the years, a small number of Cranbrook graduates, including Awodey, migrated to Vermont, and he and Higby considered a group exhibition of their work. Now, “Cranbrook Connections”, still delayed by the pandemic, has come true.

During a visit to Michigan in 2019, Higby was able to tour the Cranbrook campus, research Awodey’s thesis, and meet with the Alumni Relations Officer, who gave him a list of graduates currently living in Vermont and the New Hampshire.

The exhibition brings together nine paintings by Awodey (including two on loan from Seven days co-editor Pamela Polston) and paintings, sculptures, photographs, woven works and ceramics by 12 other Cranbrook graduates.

With its range of mediums, the exhibition pays homage to Cranbrook’s bauhausian interdisciplinary bent. In fact, “Singing Skyline,” a group of miniature skyscraper-shaped sandstone vessels that twist and lean over each other, was made by a graduate of Cranbrook’s architecture program: Aron Temkin from Montpellier.

A good starting point for the exhibition is Awodey’s “Blue Heaven,” an oil painting he made in 2005 of a blue sky framing a gray house and an adjoining carport. Three cars, rendered with rough brushstrokes, occupy the carport; a fourth red car is parked next to it. A flat Midwestern-like landscape creates a strip of greenery next to the asphalt driveway. The latter sweeps over to the carport – practically tipping the house over – and its form continues beyond into the dark mass of a tree.

It’s hard do not read in “Blue Heaven”, although Awodey once said that formal properties such as “textures, color and line” interested him more than the narrative. The title seems to ring a note of irony, given the Hopperesque isolation of the unoccupied house and the possibly disused cars.

Awodey wasn’t afraid of numbers; he just did not individualize them. A fine example is “Mother and Child”, which features the figures resting on a floor in almost flat, solid-colored shapes. The mother’s face has the smallest suggestion of facial features as she is holding something to eat or drink for the child. Perhaps referring to the historical origin of the art of this pairing in the golden religious paintings of Mary and the baby Jesus, the Awodey duo are set against a yellow wall that forms a unifying diagonal. 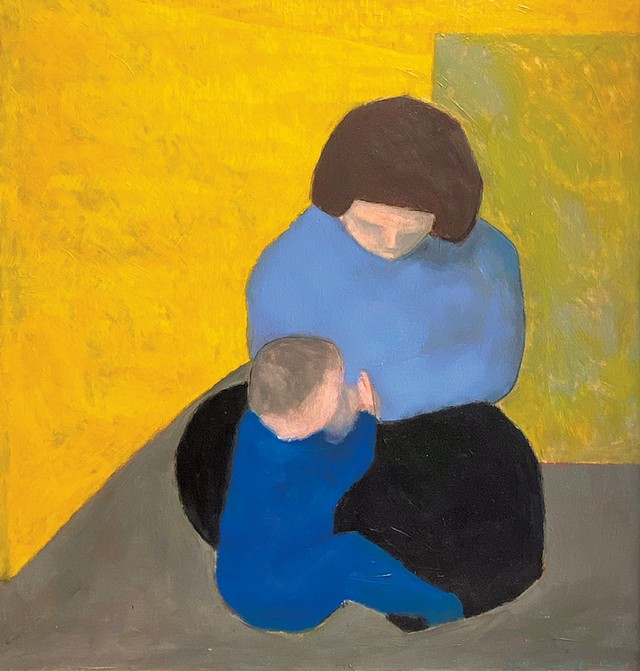 Glass’s “Liquidities” consists of a rope of latex-coated cotton thread that hangs from the ceiling and collects in a tangled heap inside the frame of a wooden box on the floor. This work, perhaps named with a sardonic nod to the strained relationship between art and silver, is beautifully combined with a number of other earth-toned textured works in the same corner.

Among these is the artist Vershire Andrea Wasserman‘s “Gold Cloth”: four wood panels painted with gold leaf and milk white paint and hung with screens of braided brass wire. The piece combines luxury and naturalness with its forms of curving sun and flowing river.

In the same corner is “Evening Tide”, by ceramic artist from Norwich Oona Gardner. It is made of black ceramic tile, with cutouts in the form of draped fabric, a pair of breasts and a link collar. Both heavy and delicate, the composition is reminiscent of a woman’s disjointed evening wear.

The white chalked surfaces of “Evening Tide” resonate with the adjacent photograph, “Underneath It All”, by Walpole, NH, photographer France Menk. An extreme close-up, it appears to capture chalky, wrinkled skin or veined stone. Menk’s three photographs inspire guessing games: Is “Drink” a galaxy or close-up bubbles? Is “Drink Again” a tongue or a trickle of red liquid?

Elizabeth Billings, of Tunbridge, often collaborates with Wasserman on public art; currently, Billings is completing a solo residency with the Vermont Chapter of the Nature Conservancy. His 2011 work “Redpine,” included in the SPA exhibition, aligns two rows of mirrored pine needles in various shades of brown along the horizontal center line of a piece of woven black fabric. It is organized nature.

RG Solbert’s 1992 ink and ink wash graphic work “Mi Dica” is the opposite of Driscoll’s style, with his unique black character with a Pinocchio nose in profile. (The title means “Tell me” in Italian.) Now 95 years old and living in Randolph, Solbert graduated from Cranbrook in 1948 and is best known for her illustrations for children’s books.

A small traditional oil landscape in a gilded frame is reminiscent of another recently deceased Vermont artist: Ray Brown of Montpellier, who died in early 2020 just before his 80th birthday.

A third ceramist represented in “Cranbrook Connections” is Jenny swanson from Cornish Flat, NH, who frequented Cranbrook at the same time as Awodey and is now director of the ceramics studio at Hood Art Museum at Dartmouth College.

Swanson’s three elegant vases, “Anew”, “Asymmetrical” and “In the Palm of Your Hand”, use sophisticated techniques: covered with a thin glossy layer of terra sigillata (sealed earth).

A gallery binder contains artist statements, including Awodey’s tongue-in-cheek one, but only Swanson mentions the impact Cranbrook had on her.

“The studio practice was the essential educational model,” she wrote of the school, “and it was an intense immersion in learning by doing. Many years later, I am still very focused on the ceramic process. ”

It would have been interesting to know why the other artists, especially Awodey, chose to pursue an arts degree at Cranbrook – which only offers graduate degrees – and what they took away from the experience. Such testimonies could have been instructive for the people of New England – whom Higby finds generally oblivious to the importance of Michigan and Cranbrook to the history of art and design of the country, she said. . “Cranbrook Connections” at least demonstrates the reach of the school.